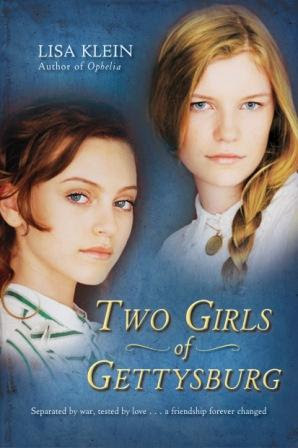 I won this book years ago but never gave it a read. When I realized that it was the 150th anniversary of the battle of Gettysburg though, I knew exactly what book I wanted to pick up to commemorate that occasion. As someone who grew up in Pennsylvania, I actually had a class trip to Gettysburg one year; sadly my big memory is that my bus broke down and we didn't spend much time there. I'd love to go back and visit now as an adult with a greater appreciation for the history.

This book actually begins in 1861 with main character Lizzie summarizing her life in quiet Gettysburg, Pennsylvania so far and soon jumping in to the war with her father and brother enlisting, prepared to do their duty. Their enlisting leaves Lizzie to help her mother and younger brother take care of the family's butcher shop and endure the privations of war. The other point of view is beautiful flighty Rosanna, cousin to Lizzie and born of the South with the feelings you might expect. As the years pass, the cousins are separated until a fateful chain of events brings them back together in Gettysburg.

One big surprise for me was the alternating POVs. Lizzie narrates for about the first 100 pages-the chapter headings always shared who was speaking and I was starting to wonder if Rosanna would ever get a chance to redeem herself as the picture presented by Lizzie made me dislike her though Lizzie's innocent love kept her connection to Rosanna strong. Thankfully Rosanna becomes a bit more sympathetic as two years of war push her to grow up and mature. Similarly Lizzie experiences great character development, becoming less selfish and discovering her inner strength.

This book reminded me a bit of Ann Rinaldi's In My Father's House, which follows a family who has the Civil War erupt in their back yard (the Battle of Bull Run) and then end in their home when they move to Appomattox. No one thinks the war is going to last long and certainly not that it will come up north. It shows war invading every part of the country, even the sleepy small places that might otherwise just ride out the storm. I also really appreciated getting more of northern presence; the only other Civil War book set in the North that I know is Little Women and the war parts aren't what is most memorable to me (and most others, I think.)

My favorite part of this book is near the end when Klein chronicles Lincoln's visit and the delivery of his famous Gettysburg Address. First the most famous orator in the country declaims for two hours. Then Lincoln steps up and delivers those simple words, which I've shared below in honor of the anniversary and because it's honestly that short.


Four score and seven years ago our fathers brought forth on this continent a new nation, conceived in liberty, and dedicated to the proposition that all men are created equal.

Now we are engaged in a great civil war, testing whether that nation, or any nation so conceived and so dedicated, can long endure. We are met on a great battlefield of that war. We have come to dedicate a portion of that field, as a final resting place for those who here gave their lives that that nation might live. It is altogether fitting and proper that we should do this.

But, in a larger sense, we can not dedicate, we can not consecrate, we can not hallow this ground. The brave men, living and dead, who struggled here, have consecrated it, far above our poor power to add or detract. The world will little note, nor long remember what we say here, but it can never forget what they did here. It is for us the living, rather, to be dedicated here to the unfinished work which they who fought here have thus far so nobly advanced. It is rather for us to be here dedicated to the great task remaining before us—that from these honored dead we take increased devotion to that cause for which they gave the last full measure of devotion—that we here highly resolve that these dead shall not have died in vain—that this nation, under God, shall have a new birth of freedom—and that government of the people, by the people, for the people, shall not perish from the earth.