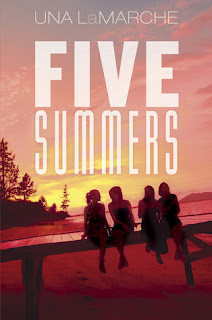 This book was not really on my radar until I received an unsolicited copy for review. Realizing that it contained many of my favorite things (contemporary genre; alternating perspective; summer; female friendship), I added it to my review schedule and I'm so glad I squeezed it in to the summer season though this could certainly be read during any other as well.

Over the course of five summers, Emma, Jo, Skylar, and Maddie forged an unbreakable bond of best friendship that sustained them through the sometimes difficult school year until they could return to camp. However once they grew too old to be campers, their lives further diverged with high school, boys, and secrets interfering. Now it's reunion weekend for the seventeen year olds and the truth is coming out-can their friendship be sustained?

As a child, I never attended camp nor did I really want to (I was an extremely picky eater who loathed physical activity/outdoors/bugs/latrines-I do not think I would have done well) so the fond memories of camp are not mine. Saying that, the Baby-Sitters Club did attend a camp and I enjoyed their adventures vicariously, same as I did for the girls here. They placed a lot of importance on the camp and the people they were there and I enjoyed getting to know them and their friendship.

I initially anticipated having some trouble with the narration which is told third person, alternating between the four girls as well as over time (the five summers plus reunion weekend.) Yet most of the story is told in the present day at reunion weekend and I feel like Emma was the main character so it was very easy to follow the engaging writing. I could barely put the book down and I easily flew through it.

As for the plot-wow, what drama! All of the girls have their secrets and they pretty much all come out over the course of the weekend, leading to a lot of anger and fighting but also self-reflection and bonding. They're not the same people they were when they first met (thank God) and they need to reconcile the changes that have occurred with the perceptions they used to have of their friends. Though some of the secrets are only hinted at in the beginning, it is pretty easy to figure them out and then just wait for the fur to fly. I found the drama all a bit much but that's just the kind of reader I am.

Overall: A fun summer read that I bet will be especially engaging to people with fond memories of their camp years as well as fans of female friendship in YA lit.