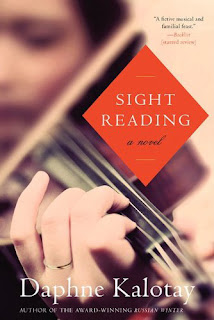 Way back in 2010, I read this author's Russian Winter and enjoyed it enough to have my interest piqued when I saw this new novel especially because of the violin on the cover (except that as I play viola, I pretended it was a viola; it's never a viola.)

The book follows artistic mother Hazel and composer/conductor Nicholas whose marriage is broken up when he sleeps with young violinist Remy. The book follows them over twenty years of struggles incorporating insights into music, art, and life.

I found this book to be very heavy on character development so it was sometimes a struggle to balance the three perspectives especially because I liked Hazel the most by far. I viewed Remy as the callous jerk who broke up a marriage (also a child was involved) and I disdained Nicholas' self-absorbedness, a common theme throughout the novel. Yet I found them all compelling and kept the pages turning, unable to stop until done.

This is most probably due to its incorporation of music. Nicholas conducts at the conservatory where Remy is studying and both of their plots rely heavily on music. I especially adored Remy's summer taking an advanced master class-there was such passion in describing her musical education. I wonder if Kalotay plays an instrument because I thought she did an outstanding job with descriptions here all around.

Sample Quote (just because I loved it): "...But the middle voices were just as important. The seconds, the violas, the altos. The ones no one paid much attention to. They were the ones who added texture and depth, whose presence, if generally unnoticed, was absolutely necessary." (p. 130 in ARC)

For non-musicians, there is a glossary of musical terms at the very end. I always appreciate such resources and I found it interesting to have the translations of terms from say Italian or French to English as well as a bit of history if relevant.

Overall: I feel like this would be a good book for book clubs because though classical music plays a large component, it is at heart focused on relationships, love, and family, very universal topics and it would certainly provide a lot of fodder for discussion with its potentially polarizing characters.