I'll Be Seeing You 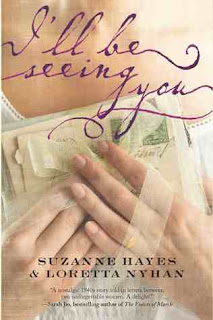 This book popped up on my radar after seeing it recommended on Dear Author. I adore epistolary novels and the World War II time period so I eagerly grasped at the chance to read and review this. I'm so glad it got on my radar because I adored this book and will be pushing it at my mom and grandma as I think they will like it too. Christina T noted in my comment section that it made her think of The Guernsey Literary and Potato Peel Pie Society. Having read both, I think that is an accurate observation and would recommend fans of one to check out the other if they haven't already.

As for this book itself, I adored its portrayal of female friendship despite differences in upbringing, temperament, distance, and almost anything else that differentiates people. What brings the two women together is a pen pal program for military wives beginning in 1943 and going through the end of the war. Very quickly these women form a tight bond that sees them through their difficulties and binds them as family.

I would have to say that I more immediately connected with Glory, a young wife and mother living in New England, born of privilege, (who is actually my age) who is struggling with missing her husband and an illicit flirtation with a childhood friend. Yet as she made some spectacularly bad decisions, I found myself more drawn to the steadier presence of Rita, a Midwestern sensible lady whose husband and adult son are both out there fighting. Still I liked both ladies immensely and loved as they grew to trust each more and opened up their hearts, also incidentally expanding the cast of characters who all found a place in my heart.

What was most evident to me was the combined struggling and pride of everyone in America. Yes, many things are rationed (nifty recipes are included in the book and I imagine they would be delicious to make if you wanted to challenge yourself) and they frequently have to do without. But they know it is in service of ridding the world of the tremendous evil of potential Nazi domination and they're able to console themselves about the sacrifices.

One last thing I really loved learning was from the end where the authors are interviewed. For example, the authors themselves have never met (at least up to that point in publication) and their "meeting" somewhat echoes the meeting of their fictional creations as they bonded through blogging. Yet already they are planning their next novel following sisters and set during the Progressive Era-I definitely want to check it out!

Overall: A very enjoyable read-though fast-moving, it has deep emotional roots and I can see fans of popular women's fiction eating this one up!