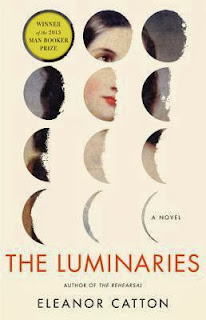 When perusing the shortlist for the Man Booker prize, this one immediately captured my attention and once it won, I requested it from the library, saving it for my trip when I could devote my attention to it. I think that was a good decision because I enjoyed myself immensely though I don't know that I necessarily understood the astrology underpinning the undertaking.

The book begins with a massive character list. I skipped over this as I usually do though I referenced it a bit as I started. I think my experience reading War and Peace was very helpful at the beginning as, instead of trying to commit every name and description to memory, I let them flow over me and as they were repeated, they got stuck in my head regardless.

In 1866 New Zealand, twelve men have gathered to discuss several mysterious possibly related circumstances when they are interrupted by a new man to town whose presence invites them to share their stories. The twelve men are of disparate circumstances with their own unique perspective on the events leading up to that night. They are concerned to varying degrees about the incidents: a wealthy man has disappeared, an opium-addict prostitute attempted suicide, and a fortune was discovered at the home of a dead man. If I tried to explain more, you'd lose the opportunity for it to unfold for you.

As you can see from the page count, this is a monstrous book and it definitely took me a while to get situated, to feel that I had any sort of grasp on the characters and setting. But it's also an enchanting book. Once I had committed to reading it, I was committed and I had to keep frantically turning the pages to reach the end. Though I'm not well-read in late nineteenth century literature, I noticed some tropes from the time such as the immoral woman and the abuse of opium. Everything seemed very grounded in the time period and I, an American, enjoyed the feeling of the Wild West as prospecting for gold is the common employment for many men in the story.

I don't feel very qualified to delve into the literary qualities of this book but suffice it to say that I found it pretty approachable if one takes one's time. It would be hard to read all in one day unless that was literally all you had to do that day. But it is certainly worth curling up with for several evenings and puzzling out its intricate plot along with the characters. I did feel that the ending could have been more concrete but I am a reader who likes every loose thread tied up; enough answers are provided to bring the story to a satisfying close and to keep me interested in reading more of Catton's work.