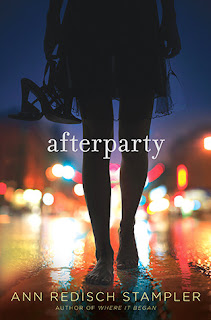 Last year I read this author's debut Where It Began and found the writing incredibly engaging; however I struggled to connect with the main character Gabby. When I picked up Afterparty, I hoped to find more great writing in addition to a main character I adored. Alas it was the same old story. The writing was compulsively readable but narrator Emma is baffling and eventually incredibly annoying to me.

Starting from the beginning, Emma lives with her very overprotective father under the burden of her mother's poor decisions that have led to his strict regime of rules over Emma's life. All she wants is to be "normal," which makes sense to me. However her normal is so far away from mine. She gets caught up in the life of very rich people involving hooking up and a lot of drugs, especially at the culmination of their yearly social scene the Afterparty (at least this is my understanding; I don't party and do not understand the appeal.) While I sympathized with Emma's desire to break out from her dad who is extraordinarily strict, I thought she went so far in the other direction and made so many poor decisions.

Among those decisions is befriending the wild Siobhan who pushes Emma out of her comfort zone, sometimes with exciting fun result but more often with extremely negative consequences. Their dangerous relationship is at the heart of this book. Like Emma, I initially found Siobhan exhilarating too. My life is pretty dull (basically I work and read-I'm not going out partying ever) and I can see how she would be enticing. However as an adult, I read the writing on the wall about Siobhan who goes full-on psycho near the end before Emma, putting me in the position of waiting for Emma to figure out what I already knew. Unsurprisingly there are also a few boys, namely Dylan, the big crush for Emma. I was initially on her side in pursuing this boy but he wore out his welcome. Her continued profession of affection for him was another reason we didn't quite click.

In the end, though I liked the writing of this book well enough, I found the characters and their motivation exasperating, meaning this was not a perfect read for me nor one I'll necessarily be recommending to all.