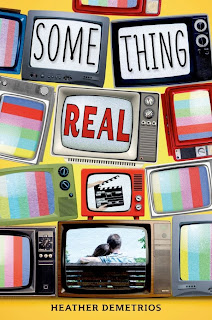 I believe this book caught my attention because of its unusual synopsis which had the trademark symbol after the main character's name. What was going on with that? Then there was the fact that it looked to be exploring the psychological effects of reality shows. Though the closest I get to reality TV now is watching the mocking The Soup, for some reason I find it difficult to resist books that feature them.

In this case, Bonnie™ Benton has grown up in front of television cameras; in fact she was born on film, the only one of her twelve siblings to be so. She has two older siblings and the rest are younger, adopted from around the world due to her mother's desire to have a baker's dozen of children and the muscle and money of corporation MetaReel who have subsequently filmed every year of Bonnie™'s life until her thirteenth year when her suicide attempt shut production down. However it has been four years and they're restarting it to Bonnie™'s intense dislike. Her struggle to cope and escape from the hell of this filming comprises the narrative of this novel.

The book actually opens with Bonnie™incognito as Chloe tense over something as seemingly simple as getting a yearbook photo taken because of her years in the spotlight. This anxiety only increases when she discovers that the reality show is starting up again much to the delight of her mother, stepfather, fame-seeking older sister, and the younger kids. The only one who seems to understand is her beloved older brother Benton™who has his own reasons for wanting to stay off camera (underaged Benny drinks and smokes and is gay with a very much in the closet boyfriend.) Adding to her angst is a blossoming romance with Patrick, her long-time crush who she doesn't think will want to be a part of the media frenzy that is her life.

One element I thought was handled very well was the growing up as one of thirteen children. Because most of them are so young, we really only get to see Benton™, Lexie™, and Bonnie™(all seniors) express themselves and I could not name the rest of the children but the chaos of such a life is well conveyed. At one point Chloe/Bonnie™remarks that such an upbringing is excellent birth control and I must agree. I was also pleased with how Chloe and Lexie™bond and move toward rapprochement after years of tension. I guess in general I just loved the relationships between the siblings.

I also appreciated the exploration of growing up on camera (particularly apt as I just saw the People magazine about Kate Gosselin and her twin daughters-what is life going to be like for them as they get older?) I highly value my privacy (notice how I don't tend to share that much about my life? Of course I'm also pretty dull so there's that too :) and can't imagine being on camera that much in addition to having it broadcast for millions of people to see.

In the end, I feel like I should be rating this book higher but I'm just not passionate about it. There are so many great points: beyond the aforementioned investigation into a highly relevant issue and the complex family relationships explored, there are two great romances, some strong friendships, and some plot twists. But I am not left with the urge to push it on people. You can't click with everything you read and that is the case for me with this book.