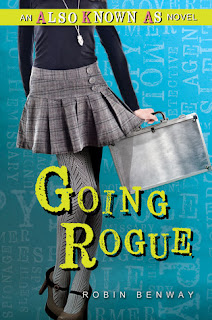 I was absolutely enchanted by last year's Also Known As and was thrilled to continue the series with this sequel. There are two big changes for this go-around: Maggie's best friend Roux and boyfriend Jesse know about her life as a spy and the Collective are no longer the good guys Maggie always thought they were with everyone becoming a potential enemy.

For me this book was split in to two parts though not formally. In the first half, Maggie is learning about the threat to her way of life and continuing to adjust to outsiders knowing about her and in the second half, everyone is on the run. I far preferred the second half as things actually were happening. The first part still had the same engaging writing that I expected in this series but it took so long to build to anything. Instead Maggie is having arguments with Jesse and Roux as well as her parents and though Angelo is positioned as a good guy, I was getting some sketchy vibes from him. Previously people who were thought to be trustworthy were proved otherwise and I didn't want that to be the case for Angelo (I'm not going to spoil you about where his loyalties lie.) There were some great moments when Maggie dives back into the spy's life including having to stay frozen for hours in a bad guy's apartment but mostly I was waiting for something exciting to happen.

The second part seemed significantly shorter though I didn't keep track of the page count. This is when Maggie, Roux, and Jesse go on the run, ending up in Paris and falling in with a whole new crew. We did not get to spend much time with these people so I don't really have an opinion about them at this time. They seemed okay but I liked Maggie's high school hijinks more and wasn't interested in meeting so many new people this late in the game. Also I may be a bit paranoid but I kept suspecting them of nefarious motives as well.

Overall I didn't feel the two parts cohered well together as each gave me a fairly different tone. I am definitely less enthusiastic about this second installment than I was about its predecessor. This book just seemed a bit on the slow side for me and I wanted more excitement throughout.