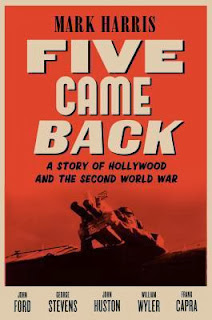 Some years ago I spotted an interesting sounding book in Entertainment Weekly and promptly put it on hold. When it came in at the library, I devoured it and got my parents to read it as well with them both loving it as well. What book was this? Well as you might have guessed, it was by Mr Mark Harris called Pictures at a Revolution about the five Best Picture nominees of 1967 and it inspired me to attempt to watch all five (still haven't managed as some are boring *ahemdoctordoolittle*) as well as sparking an interest in classic Hollywood. Thus it was a no-brainer to request his next book about cinematic history. While I recognized the five director's names (John Ford, George Stevens, John Huston, William Wyler, and Frank Capra) that are the focus of this book, I didn't know that much about any of them and certainly next to nothing about their experiences during World War II.

The book opens in 1938 following the five men in their Hollywood careers, some at the height of their popularity while others were just beginning their career until the United States entered the war and all five joined up, bringing their knowledge of film making to aid in the production of films about the war for both a military and civilian audience. Harris skillfully weaves in a discussion of propaganda and the impact of war while tracing the activities of the men.

As I shared, I didn't know much about the personal lives of these men so everything in this book was revelatory. My personal favorite sections did relate to actual movies I knew (such as a look at the excellent postwar film The Best Years of Our Lives) bringing back my enjoyment of Harris' previous book but I liked all of the other sections too. The five men had such experiences journeying to the Pacific and the European theaters and serving in different branches. But they also knew each other and were united by a Hollywood background and similar challenges while in the military that help keep the thread of the story moving.

Overall: I just click with his writing-now I want him to explore the anti-Communist movement in Hollywood during the fifties as we get hints of that in this book!