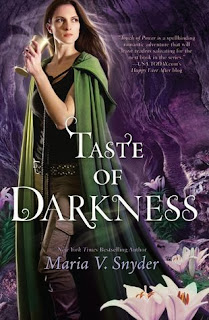 I've eagerly followed Snyder across many worlds including the one of this Healer series and while I adore her introductions and the exciting worlds they set up, I've tended to have problems with the second book and especially with the conclusion. Thus it was no surprise that I adored Touch of Power and had some reservations about Scent of Magic. I hoped this finale would be the one to prove me wrong though. And happily it was as I felt this was a very strong conclusion to the Healer trilogy.

At first I worried. I didn't really remember what had happened at the end of the second book and basically the only two people I remembered were main character healer Avry and her lover Kerrick. Many of the other names mentioned flustered me but thankfully as I kept reading, most of the characters came back to me especially the lovable jokers who have been present in this series from the start.

I can't go too in-depth for fear of spoilers so I will just mention some elements that seem notable. For instance I think I can reference two moments that had a big impression on me. One is when Avry sets out to do something small and ends up doing something much bigger that has huge repercussions on Prince Ryne's mission. The other is Avry getting entangled with cannibals. The former was more of a fist-pumping moment while the latter horrified me for obvious reasons.

One of the biggest threads for the book has been Avry's connection with the evil Tohon. I'm not sure I liked the way it was handled as I have been consistently uncomfortable with the manipulations he performs on her, making it difficult for me to read some sections. In this case I thought the final confrontation with him was a bit easy though the very last pages made up for it presenting me with just the ending I wanted.

Another point to mention is that Scent of Magic left me disappointed with the separation of Avry and Kerrick. These two certainly do not live in easy times so it is certainly no surprise that they don't get to spend nearly enough time together in this book but what parts they did were intensely romantic. I really wanted them to get a happy ending :)

Overall I think this has been Snyder's strongest trilogy throughout and I am eager to see what she has in store for us next!