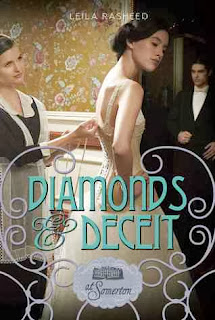 Who had forgotten almost everything that happened in Cinders and Sapphires? This girl! What I remembered most vividly was Lady Ada and her affection for Indian Ravi, a love rendered impossible by their vastly different stations in life. I personally found it baffling as I never thought the reader got enough insight into their relationship to care about them but apparently something about the romance made it stick in my brain (probably my irritation at it.)

Thus I opened this book and panicked over my inability to remember the important characters, let alone their complicated relationships to each other. Luckily as I kept reading most everything came back and was further elaborated upon. As before Ada and Rose are our protagonists, navigating a difficult season with romantic complications. Ada continues to be in love with someone who would be deemed unsuitable (and who I think is dull) and Rose struggles with prejudice against her background. Meanwhile we also jump around to peek at the various other characters, both upper-class and servant, that surround these young women. Disappointingly we don't get very much about Sebastian and his romantic travails nor did I feel that women's suffrage played the role it did in Cinders and Sapphires. Furthermore I didn't really like any of the characters tending to find most of them petty; however this was balanced by the writing which completely sparked with me and found me flying through the pages.

I think the ending was my favorite part as it really got my heart pounding because (finally) England has declared war on Germany, meaning that book three is going to reveal a huge shake-up. I don't know what characters will be sent to fight, who might volunteer to nurse or what but it's going to bring big changes to daily life for the lords, ladies, and servants.