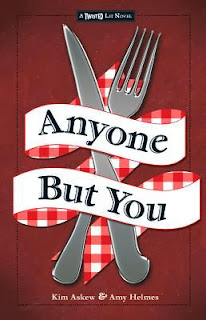 Last year I had the pleasure of reviewing the first two books in the Twisted Lit series, Tempestuous and Exposure, which tackled Shakespeare's plays "The Tempest" and "Macbeth" respectively. They made me wish I was more familiar with the source material so I was pleased that this third book was inspired by "Romeo and Juliet" because that is one play I know very well and I feel like the opposing feuds can translate into a modern context well.

As I suspected, the antipathy between the two families (rendered here as the Caputos and the Montes) was strong and fairly popped off the page. However in this retelling, we get a peek at the origin of the feud in alternating flashback chapters. Personally I found those historical chapters more engaging than the contemporary love story-we get a peek at a World's Fair, Pearl Harbor, and one character manages to survive a Japanese prison camp. The origins of the feud aren't particularly engaging but the ending chapters where a participant comes to grips with his pointless anger are incredibly touching.

I found ostensible main character Gigi to be a bit dull and her romance with Roman is love at first sight with what felt like insufficient meat to justify their relationship and the drive they have to end the feud to celebrate their love openly. Maybe I would have liked it more if I hadn't been comparing it to the historical chapters, which packed more of a punch for me. The comparable Paris character is a real creep, adding a new twist to this old story and the outside confessors Gigi appeals to were incredibly appealing (I suggest Chef and Carmen are similar to Juliet's Nurse and Friar Lawrence in the original play).

What this book excelled at for me was highlighting the pointlessness of carrying a grudge. The character who does comes to regret it immensely especially the damage it has wrought on several generations. It is to be hoped that future generations can heal and bring their families together to overcome the tragic rift.

Overall: Another strong entry in the Twisted Lit series and I bet it will prove to be a popular one due to its "Romeo and Juliet" inspiration.