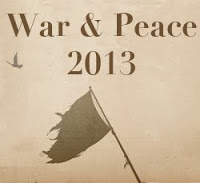 This section ended up being really easy for me (I thought we had to read parts 1 AND 2 but it was just 1, which was totally manageable.)

I found a lot to love as I passed through this section. First, to my immense relief, there weren't really that many "war" sequences. Instead there is a lot about Napoleon, Alexander, and other VIPs but it is mostly talking rather than any battle. Rostov still has a sequence of bravery for which he is commended but even he is unsure why he received that to my amusement.

Back at the home front, Natasha is very ill after her broken engagement but also starts to get on the mind, seeking release in religion. As a shorter sequence, I find that I don't really have much to say. Except...

I have found my most favorite part of the book so far in this following quote:

The she is  Natasha and I feel like it kind of captures my personality. I really want to know/understand everything and sometimes with the resources available through the internet, I feel like that is possible. Yet it is only an illusion. I was very humbled by this thought over the past few days and anticipate spending a lot of time reflecting before I start the next section.

What did everybody think of this section? Go me, staying on track :)