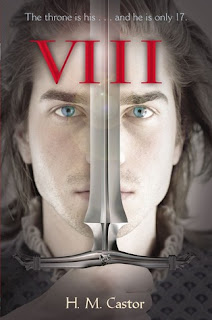 The Tudor period is one of my favorite times in history and once about which there is a plethora of material. And yet this look at Henry VIII from childhood to death still seemed unique enough to stand out and be worthy of a read.

After finishing, I feel like I received a lot from this book. It is interesting to see how Henry's childhood shapes his future particularly with this first-person narrative guiding us through his life. Though he was born a second son, he does end up succeeding to the throne. He absorbs his father's lesson of having heirs to secure continuity but ignores the warning about practicing thriftiness as he pursues the crown of France. He sees the death of his beloved mother hurt his father but goes on to divorce or kill 2/3 of his wives. Henry is such a complicated, multi-faceted character-it is easy to see how he and his continue to enthrall us after all these centuries.

As usual, Anne Boleyn is pretty much my favorite character. I just want to bring her to our present-I bet she could do great things when her worth isn't based on her ability to produce a son with a particular man. I adore her cunning and ambition and though this isn't my favorite version of Anne, I still enjoyed her.

Some important historical events seemed to be missing to my mind: for instance his affairs with Bessie Blount, resulting in Henry Fitzroy, and Mary Boleyn before his romance with Anne. I think the former would have been especially useful to the narrative, which focuses in large parts on Henry's attempts to ensure the succession and to carve out an empire for his heir. The birth of a son to a mistress gives further proof to Henry that he can father sons and the fact that none are legitimate is the fault of his wives. My memory also brings to mind Charles Brandon, Henry's best friend, who runs off with Henry's sister Mary. This pisses Henry off but the situation is never mentioned in this book, perhaps because Brandon does ingratiate himself again.

I also personally am not very familiar with the War of the Roses and the beginning of Henry's life, having tended to read more about his wives and children; thus I found the early chapters very difficult though a bit of googling helped to clear of some points of confusion. They took a long time to get going. Additionally I thought the later chapters were compressed, missing some of the detail of the Catherine/Anne years. This maybe because it covers fewer years but it felt rushed to me.

SPOILER:
I'm not sure this should be classified as a spoiler as people probably know the history but since it occurs in the final pages, I figured I'd keep it secret just in case. Throughout the book Henry is plagued by visions which he assumes mean that he will be an amazing ruler, but which he later interprets as being the fate of his son. At the time of his death though, he discovers it is his second-born child, Elizabeth, who will be the great ruler of England, to his surprise. I just thought it was so cool how this was done although I was also predicting that was the case based on my superior knowledge of British history :)

Overall: A different take on Henry VIII that should interest fans of the period. Pleased to see that Castor is working on a sequel of sorts, tracing how Henry VIII and other factors impacted the shaping of the personalities of his daughters as well as looking at the complicated sister-sister relationship of Mary and Elizabeth.

Other Opinions:
A Dream of Books
Once Upon a Time
Rebecca-Books
Thoughts from the Hearthfire