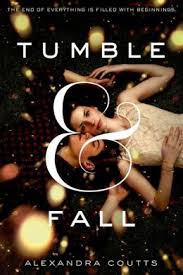 I wanted to read this book solely because of how lovely I found the cover. My expectation of this was that it would be a crazy starcrossed romance filled with passion and young adults racing against the clock of the end of the world (I may or may not have read the official synopsis; okay, I basically just skimmed it.) Needless to say what I actually got was quite a bit different.

Yes, there is an asteroid heading toward earth that will result in destruction and yes, this book does follow young adults over the course of a week as the residents of earth prepare for the end. But it's not very romantic, despite what I feel the cover promises. We get three different perspectives of teens on an island struggling with lingering relationship issues, mostly familial but also romantic as they also wait to see what the asteroid will bring.

Right off the bat I noticed that the story was narrated in third person. Though I have enjoyed third-person narration, I tend to feel a more personal connection when it is first person and this book was no exception. Though I sympathized with the stories and situations of all three narrators, I never felt very emotionally tied to them no matter what they underwent. Even as I anticipated death for all of them, I never felt that sad.

Who are our three protagonists and how do they tie together? To answer the second question first, they don't have much of a connection; they just all have ties to an island and the final chapters put them all on the beach together.

First introduced is Sienna who is just released from a psychiatric home, picked up by her father to spend their last days as a family with her younger brother and the father's fiance. Reuniting with a childhood friend sparks a romantic relationship but also challenges Sienna's view on mental health and family. Second is Zan, mourning the death of her boyfriend Leo for ten months but suddenly confronted with information that might mean he wasn't as great as she always thought. And our third narrator is Caden, whose alcoholic mother and father who abandoned them means he has some lingering questions. I think I would have appreciated these more if they had tied together more directly. I understand that they all had unfinished business but a friendship among the three might have made it mean more to me.

Overall: An interesting read but one that lacked an emotional punch. I also feel like the cover promises a far more romantic story than it actually delivers.

Other Opinions:
Carina's Books
Realm of Fiction
Scott Reads It
Young at Heart