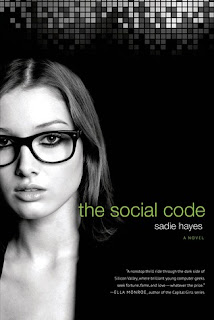 I believe this is one of my first New Adult reads and I actually really enjoyed it. I haven't been very interested in New Adult because it seems to be mostly presented as Young Adult with steam and that's not really the kind of story I liked. But this one followed college students battling it out in the rough and tumble Silicon Valley world with only a hint of romantic entanglements and I found it all deliciously juicy!

Adam and Amelia Dory grew up in the foster care system, sometimes lacking even basic necessities  but now they're at Stanford and the world is their oyster, particularly with Adam's ambition and Amelia's brilliant coding abilities. Soon they're working on their first start-up interacting with others of various intentions and navigating the wild and heady days of being young

Yesterday I reviewed Tumble and Fall and found myself dismayed with how the third person narration left me feeling disconnected from the characters. While this is also narrated from the third person perspective and I can't say that I feel very connected to anyone (maybe a little bit to Amelia despite us sharing very little in common beyond gender), it didn't bother me. I loved the constant shifting from character to character and getting just a peek into their ambitions and how they were pursuing them. Funny how that works, eh?

Part of the reason I didn't click with the characters is that they're really revealed at their core, with their basic petty natures coming to the fore. Basically only Amelia has a real moral integrity while the other characters compromise ethics in pursuit of their larger goal. I think I liked that Amelia has deeply held principles but I didn't mind that the others didn't. I found them all enthralling and the easy writing style helped me go through this book fast.

I'm not going to go very in-depth on the twists and turns but it looks like this book is a consolidation of three previously published e-novellas by Hayes so they may already be familiar to you. I can share that this book ends abruptly and may leave you wanting more as it certainly did for me. I certainly hope there will be at least one sequel and I know I will return for it.