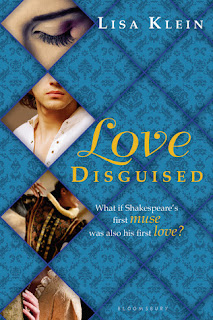 Though I'm not the biggest Shakespeare fan (I appreciate his contributions to the English language but I just don't read many plays), I find myself continuously drawn to stories about his life. There's just so much we don't know about the guy so it's ripe for various interpretations.

In this version, Shakespeare has a run-in with the sisters Hathaway that ends wrongly and he eagerly jumps on an opportunity to go to London and pursue his fortunes as a player. Meanwhile Long Meg has had trouble follow her for ages and is eager for a safe place to call home. When she meets Shakespeare, she undertakes to disguise herself as a man to aid him in his quest while also unwittingly serving as his first muse.

I've read some discussions lately about deciding when or even whether or not to DNF a book and this is an instance where I decided not to DNF and it paid off. I found the beginning of this book rather dull-it's clunky and it's hard to see how everything ties together. But I persevered and though I never fell in love with the characters, I found several elements to really admire.

First and foremost would be the language. I feel like Klein had a ball selecting just the right Renaissance-era language to reveal Shakespeare's quick and ready wit. Once the story gets moving, the writing really sparkles. It is just making it through the beginning that is difficult. Second, a big inspiration for this book was Shakespeare's comedies rather than his more famous tragedies. I recognized several elements (women dressed as men being the main one) but I bet fans of the plays will make out even more and enjoy it accordingly.

Meg is a really cool character! She gets to do so much over the course of the book, serving as enforcer, helping Shakespeare with his word choice and plots, and running all over London. Is there anything she can't do? And the book applauds her for her derring-do. Unfortunately Shakespeare is kind of a jerk and my inability to sympathize with him dragged down his bits. Yes, I enjoyed his way with words but as a person, he sucks.

Overall: I'm glad I stuck with this book and I think people who like language will find much to enjoy in that regard. Character and plot people will probably be less enthusiastic.