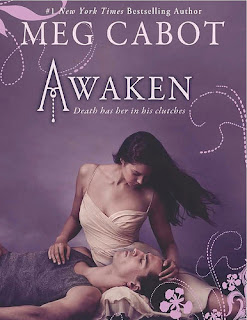 Meg Cabot has long been one of my favorite authors and as a prolific writer, she's also at the top of my list for most read. Saying that, this series hasn't really done it for me. Though I dutifully read Abandon and Underworld, something seemed to be missing. When I had the chance to read Awaken, I was hoping to rediscover that Cabot magic while also checking off another series as finished.

And to my surprise, I actually really ended enjoying this book. Though there were times when Cabot's signature style annoyed me, I loved it when I was a teenager but now it no longer seems fresh and surprising, I was pretty swept away. The most enjoyable part was generally how take charge Pierce is. I read a comment somewhere about how previously John saved Pierce but now the cover shows a reversal with her saving him and I really like the strong female doing that while also retaining a sense of humor in the face of seemingly impossible odds.

It is difficult to review the third book in a trilogy without spoilers but I'm not going to go too in depth here other to say that I believe all the major players continue to be her with a few new introductions and the questions that have been posed throughout are addressed. Previously I remember not really enjoying the Pierce/John romance but I feel like that was toned down in this book and subsequently became more palatable. Pierce's parents also play a rather significant role in the plot, reminding me why I enjoyed them in the first place.

Overall: A satisfactory conclusion to the series-personally I think it ended up being my favorite although I'd have to carve out the time to read them all back to back to take a strong stance on the issue.

Cover: I do really love this cover-I think it's my favorite as it just seems very romantic to me with the purple rather than the color palettes of the previous covers.