ARC Review: The Chaos of Stars 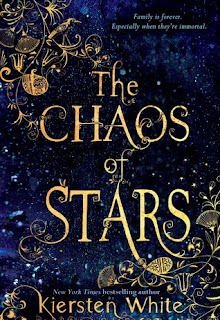 The Chaos of Stars by Kiersten White
3.5/5 stars
HarperTeen, 2013
288 pages
YA Paranormal
Scheduled to release September 10

Having read every other title from White, of course I was going to read her latest. For some reason I keep wanting the title to be The Chaos of THE Stars-has anyone else made this slip?

Isadora is literally the daughter of gods-Egyptian gods that is; Isis and Osiris to be specific. As just another in a long line of children, she finds herself fed up with these gods and grasps at the chance for a "normal" life in America with other mortals like the gorgeous writer Ry. But no matter how far she goes, she can't escape family.

This book was a very mixed bag for me with some elements I really enjoyed and some that I felt were not utilized very well. We'll start with the positive, which was the take on Egyptian mythology. I have not read many books centered on Egypt at all so it was cool to get a brief introduction to some of the gods and goddesses. I by no means consider this a definitive interpretation but I appreciated it. Each chapter opens with a little snippet of Egyptian mythology focused on these gods, which felt very informative. Another bonus is that this seems to be a standalone though there is room to explore the world more especially through the character Ry.

As White shares in her author's note at the end, she wanted to look at what it is like when you realize your parents aren't perfect, which is well-represented in Isadora's angst throughout the book. Her story also follows her coming to terms with her own mortality. Though her parents are gods who will endure forever, she and her siblings must face death and Isadora initially finds that incredibly unfair and it plays a huge role in her resentment toward them especially toward her mother.

As usual, I found White's writing very chatty, casual, and easy to read. However while I enjoyed reading this, I also felt that for rather a long stretch of time, nothing much seems to be happening. Yes, Isadora is meeting some new people (including a boy) and learning more about herself but I felt like all the action was packed into just a few chapters at the end instead of well-paced throughout.

Well, and just in general, I don't find myself very enthusiastic about it. Did I adore the California setting? Very much. Did I think there was a neat premise? Yes. Did anything really stick out as something I hated? No. But was there anything that will keep this book firmly in my heart and memory? I don't think so. Still a nice lightweight book when you just need something fun!

Cover: Gorgeous! White has been very fortunate with covers and the stars are very appropriate!

Other Opinions:
My Friends Are Fiction
Punk's House of Books