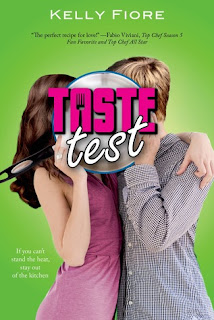 I adore cooking shows despite not being much of a chef or gourmet eater. But as a reader, I also love reading about cooking so discovering that this book was about a competitive cooking game show (in my beloved YA category) had me very excited!

Right away I found myself drawn into Nora's world of cooking, eating up all the setup before she arrives at the competition. However once she's there, the takes a turn for the worse when Nora instantly finds herself disliking fellow competitor Christian. Now I'm not saying he gives the best first impression but her instant hate seemed extreme to me. Their relationship continues to be filled with childish bickering and put-downs as the competition heats up.

There have been times when I've really liked characters that other bloggers/readers find unlikable; those characters are difficult people often flailing in a world where they feel misunderstood. That is not the case here as I felt both characters were supposed to seen as charming and appealing by the reader, while I was increasingly turned off. I was especially exasperated by Nora's frequent use of "ho-bag" and such words to describe her roommate (who is certainly mean but does not warrant the other terms). Nora is just so judgmental and it really wore on me; Christian is really no better and since they take up the majority of the page space, the fact that I couldn't stand them substantially lowered my rating.

The other characters don't add much either. Sometimes a great secondary character can save the day but Gigi, Nora's friend and competitor, while cool, ultimately fails to do so for reasons that would be full of spoilers to spill. No other character gets enough page time to make up for Nora and Christian's sniping.

On the bright side, I love the bright colors of the cover and that recipes are included at the back. I'm not much of a cook but I do love looking at recipes (if only there were pictures!)