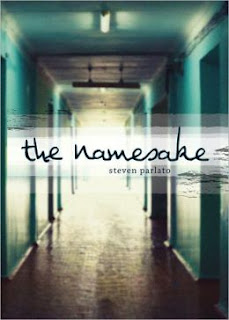 I'm not really sure why this book callled to me as on the surface it doesn't really seem like a "Stephanie" book. It's a male narrator dealing with grief and some very dark subjects in a literary novel fashion. But it is contemporary YA mostly set in a high school and featuring religious questioning so maybe those were elements I somehow sensed.

My rating for this book is largely based on personal enjoyment, which was not very high for this book. It is dark: the book opens with the narrator reflecting on his father's suicide and that hangs over the entire book as Evan delves into his father's tortured past (if I mention that his father was an altar boy, you might be able to figure out some of what he endured). I do not tend to like dark books and there were many difficult passages for me.

As for the writing, I thought this book had a more literary quality unlike a lot of YA, which tends to lean commercially in my opinion. However some of the characterizations felt off. Evan is supposed to be very smart (having skipped at least one grade) but I didn't really get that impression from him. He was more sensitive than some of his peers but intellectually,  he seemed average. His best friend Lex has had some trauma in her past and I thought the reveal of that darkness wasn't handled as well as it could have been (I don't want to reveal spoilers) although by the end, it was almost completely laid bare.

Another element that was hard for me was just the formatting. This book isn't divided into chapters but every few pages, there are section breaks. I would have preferred for each of those sections to be turned into chapters. This is a very odd little personal preference that probably wouldn't bother anyone else.

Overall: A warning that this book is definitely on the dark side and more suited for older readers. Definitely check out some other reviews to see if this one might be right for you.

Other Opinions:
Hopelessly Devoted Bibliophile
In Bed With Books
The Book Babe