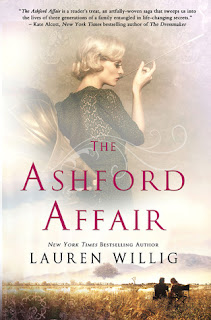 I'm a big fan of Willig's Pink Carnation series so I was thrilled to check out a new novel from her even if it meant not getting to continue with the exciting spies of that series. What I did not realize was that this book would also be a blending of past and present, with scenes taking place in the 1920s, 1999/2000, and a few other years as well to trace a family's history.

Beyond familiarity with the author, I also was grabbed by the reference to "Downton Abbey" and the mention of a Kenyan setting. However I did not notice the contemporary setting, which came as a surprise to me. There is one chapter in the 1920s and then it jumps to 1999 and I was so thrown. It took me a couple of chapters (and reading over the goodreads summary) before I was eased into the story.

It's a big family story with Clementine Evans on the path to partnership, looking into her grandmother's past, spanning England to Kenya and the many family secrets. As the story unravels, I found it fairly predictable but I was still sucked into completing the story. None of the characters really popped out at me. Clemmie is a workaholic lawyer who has just ended an engagement and has neglected family relationships in pursuit of a partnership. But the illness of her grandmother Addie leads to her questioning the family past. Meanwhile Addie's story in the past is of a poor relation, pushed to the side by her lady aunt but protected by her cousin Bea; their relationship becomes increasingly tangled as they age and the world goes mad (they live through World War I and the destruction of the aristocracy).

For me, the most interesting part was reading about the lives of the aristocracy, pre and post war. Before the war, they are flying high but after, Bea and the other young people drown in ennui and pursue any distraction to keep themselves from their thoughts. This also leads to some horrible decisions on the part of Bea and someone else.