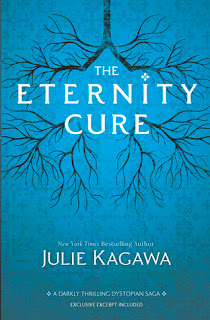 Last year I was surprised by how much I enjoyed The Immortal Rules since I did not like Kagawa's Iron Fey trilogy nor do I generally like vampire books. What struck me about the book was when main character Allie was turned from human to vampire, choosing existence over certain death and how her mentor Kanin instructed her that she had a choice over what kind of monster she'd be. These words guided her as she journeyed toward Eden, aiding humans on their quest to find a fully human city among the ruins.

Book two picks up with Allie trying to find Kanin who has been captured by a crazed vampire who is furious at how Kanin sold out his fellow species to help humans. Because of their blood tie, Allie can track Kanin but she also finds her blood brother Jackal along the way and must form an uneasy alliance with him as the book progresses. I was very impressed with how Kagawa reminded us of what happened in the previous book. Some authors just dive right into the story but she took the time to touch on the foundations and most important plot points to get us ready for what was to come.

Not sure how much of the plot I should reveal as I don't want to spoil anything but some highlights are the return of some of your favorite characters as well as a lot more insight into vampires and the history of this dystopian world. There are many action sequences and a lot of violence. I found the plot a bit less straightforward this time although it is ultimately a quest just like in the first. It is expanding wider to encompass every remaining living creature, setting us up for some epic battles in the conclusion. I kind of predicted something about the ending, which I will address at the very bottom of the review in the spoiler section.

Allie continues to battle her monstrous instincts in favor of her more human feelings. This is by challenged and supported by love interest Zeke. On the one hand, he really does love her; on the other hand, he would taste so dang good! Their relationship is not easy but it has some really good moments here. Kanin was a bit of a disappointment to me here-I loved him a lot in the first book but he was less compelling this go around. That is possibly because of the charisma of Jackal who overshadows most.

Overall: An excellent sequel to The Immortal Rules-you'll want to know what came next!

SPOILER DISCUSSION:
As we approached the end of the book, I thought book 3 would be opening with a description of Zeke as vampire because no way was he dead-dead. Then book 2 ends with us knowing he's alive-he has to be a vampire right? Kagawa made such a big deal about how he didn't want to be turned so that's what has to have happened. Do you think Zeke is a vampire?
END SPOILER