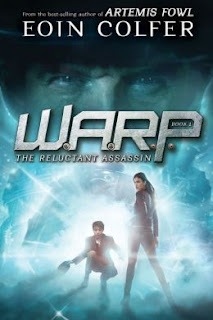 I remember reading the first Artemis Fowl book and being blown away in particular by the first few chapters. I liked the rest of the story too but the beginning was the part I read over and over again. While I fell away from the series, I retained a fondness for Colfer and his writing. Thus I was pleased to see a new story coming out, one where I could jump feet first into a new world particularly as it teased time travel.

This novel brings together two unlikely compatriots. First is Riley, an orphan in Victorian London apprenticed to the cruel and evil magician/assassin Albert Garrick who ends up traveling to the future, our present, and intersecting with the second protagonist Chevron Savano, a young would-be FBI agent. The book spends time both in our present as well as returning to the past with Garrick chasing the pair throughout. He seems near indestructible and is a suitably terrifying villain.

For me, this book took ages to really get off the ground. I dragged my feet through the opening chapters with all their set-up but flew through the ending. Especially for a young person's novel, I think the story needs to delve into the meat earlier. Once it got going, there was some snappy dialogue and ingenious plotting but it took a long time to reach that point.

Riley and Chevron are perfectly nice characters. I loved his vulnerability, having being orphaned as a baby and with a cruel master while Chevron is an orphan, having become tough and daring on her quest to prove herself as a potential agent. They had a fun relationship trying to unravel the mystery of the time travel and attempting to keep one step ahead of the nefarious Garrick.

Overall: A fun plot that just takes a little too long to get going.

Cover: Really not a favorite for me with all the faces looking at me.