Sinners and the Sea 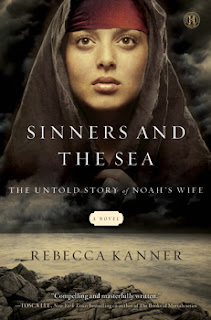 I enjoy retellings of biblical stories but have never read one about Noah or his wife so that is what grabbed my attention in this instance. Then I saw comparisons to Anita Diamant's The Red Tent, a book I read but did not review two years ago. I hated that book so it did not get me started auspiciously.

But I tried to be optimistic. However I almost put the book aside when the main character is almost raped in the first chapter. Luckily the next chapters revealed a surprisingly tender father/daughter relationship that made me a little teary until the daughter is given in marriage to Noah. They journey to Sorum where he preaches to the sinners around the area to repent. As the pair have three children who grow to manhood, Noah struggles to build an ark to bring the family to safety while the rest of the world is flooded.

I feel like the comparison to Anita Diamant is apt because I had a similar reaction to this book, i.e. not positive. I liked the beginning (before she marries Noah) and the very ending (after the flood, when they're back on land) but the bulk of the book was just awful for me. I didn't care about the characters, I hated the portrayal of religion (I was under the impression that this was a Christian inspirational novel-it is not), and this was just so dark. I think that if it had been a Christian novel, I would have ended feeling inspired and more loving toward humanity but instead I felt more separate and dejected about the state of the world.

Overall: I cannot recommend this book to people who share my reading taste nor to Christians. It might be good for people who like dark historical fiction (be warned there is a lot of fighting and sexual immorality).