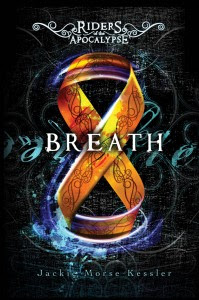 Breath by Jackie Morse Kessler
4/5 stars
Graphia, 2013
321 pages
YA Paranormal Issues
4th in YA Quartet Riders of the Apocalypse

After devouring the previous books in this series (Hunger, Rage, and Loss), of course I had to read Breath and find out how everything wraps up. We've previously visited the Horsemen of Famine, War, and Pestilence which leads us to the most-feared one: Death who has proved to be an intriguing figure common to all the books. Although I think you could read Hunger or Rage to start, you definitely need to have read all three books before starting this conclusion. If not, you will likely have trouble following the action.

Unfortunately for me, this book was a bit of a letdown. While I loved the intensely personal stories of Hunger and Rage, which drew me into a teenager's pain as she confronted something dark and real, Loss was less satisfying and more out-there. Breath continues that trend, alternating the story of Death with the life of a seemingly ordinary young boy, unraveling in a somewhat mystifying fashion. I'm not going to go in-depth at all to avoid spoilers but I was pretty unhappy with some of the specific choices of this narrative.

I think another problem was the character of Death, who looks like Kurt Cobain. I've seen many other reviewers who gushed over him but I always preferred Terry Pratchett's DEATH so this variant never ranked for me. Some other things we learn about Death in this book also kept me from falling for him.

Still I ranked this pretty high. I do admire Kessler's vision as I have found this series very different from other books out there and I think the writing is pretty good. Although the conclusion is not quite too my taste (I would probably have pulled some punches), a lot of others have found it satisfying and if you have read and enjoyed the other books, you'll have to complete the series.

Cover: Once I read the books, I find that I really love the covers and this one is no exception. The infinity sign was not a favorite initially but it is explained and that won me over.