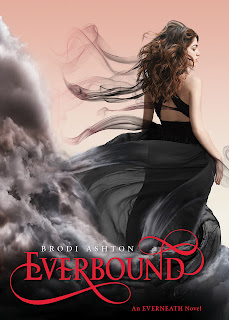 I really loved Everneath, a book I only picked up after being reassured that it did not contain the dreaded love triangle but did feature a unique twist on Greek mythology. I fell especially hard for the love story of Nikki and Jack despite the machinations of the scheming Cole and was so upset with that ending!

While I anticipated this sequel, I was also nervous because I read some really crummy second books in 2012. Happily I seem to have broken that streak with many excellent second books read in 2013 including this one. Like the first book, I found the writing style incredibly readable and I flew through the pages desperate to know what was going on.

Due to circumstances at the end of Everneath, there is not much Jack in this book. Ashton deals with this by filling the book with Nikki's memories of Jack: how they fell in love, how he showed his devotion, how he's been there for her, making me fall even more in love with the two of them. I really do ship them. But their path is not going to be easy as Cole is a trickster. Be warned-I wanted to throw my copy across the room at the end. It's not a cliffhanger per se but it will leave you craving the third book (would love for it to be titled Ever Yours).

Nikki is an incredibly devoted heroine, determined to let nothing get in her way as she embarks on her quest. There is also some new world building as we get to enter the Everneath. Although I didn't always quite understand Ashton's intentions with some of the writing, I still flipped frantically through the pages. Sorry for being sketchy on plot details-I don't want to spoil anything. Suffice it to say that this is another engaging book from Ashton that should satisfy fans. This is definitely a series to read in order so pick up Everneath before diving into Everbound.