ARC Review: How Zoe Made Her Dreams (Mostly) Come True 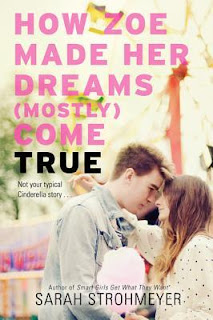 This book sounded so adorable! I love theme parks (especially that most famous of ones) and loved the sound of getting to be an intern at a magical place like Fairyland Kingdom, the New Jersey theme park setting of this book. That would have been my dream when I was a kid (it is less exciting now that I reflect on how customer-service oriented that position likely would have been.) I also really enjoyed Strohmeyer's previous YA novel Smart Girls Get What They Want and expected a story along the same lines.

One similarity was the focus on female friendship and ambition, both prioritized over mooning over stupid boys (although there are a couple of cute boys here!) Though Zoe is obviously the main character (hello-her name is in the title), her cousin Jess has an important subplot and allows us to see the unguarded Zoe as well as deeply explore her compassionate side. Ambition is also important as both girls (along with the other interns) are competing for a scholarship to pursue their big college dreams but neither is willing to compromise their standards.

A big difference though would obviously be that this is set at a theme park, bearing a remarkable resemble to Disney World but obliquely referencing the Mouse and his park.  I feel like the setting was so magical and really helped to set this book apart as something different from other light humorous contemporaries. This also showcases the backbiting drama of high schoolers competing for a significant amount of money, something I really adore.

As I mentioned, there is a bit of romance. You couldn't have so many young people mixed together and not have some flirting going on! The romance is not a big part of the book but it was appreciated with the ending resolution being especially satisfying.

Overall: A fun funny story laced with Strohmeyer's trademark humor-definitely worth checking out when you need your next summer read!

Other Opinions:
The Book Scoop
Candace's Book Blog
One Page at a Time