ARC Review: The School for Good and Evil 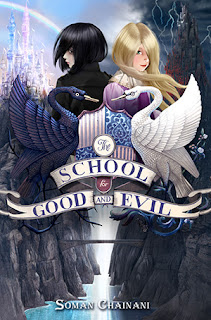 As a long-time devotee of fairy tales and all their retellings, this book has been on my radar for a long time. I love the idea of schools training up the next generation of heroes and villains, especially when those people are pulled from an ordinary world like ours. The big twist here though is that while beautiful Sophie expects to land in the School for Good to be groomed to be a princess, she actually ends up in the School for Evil while her friend Agatha, whose penchant for black and offbeat style had her marked as villain material, enrolls in the School for Good. This book follows the ups and downs of their crazy first months at the schools against a larger tapestry for their fairy tale is only just getting started.

Like most of the books from HarperCollins, I found the writing of this one absolutely addicting. It's a little on the longer side but the last half, especially, flew by. I could not put it down. The plot has a lot of setup introducing both girls in their homes before transporting them to the schools but it all seemed necessary to set up our expectations for life at the schools. A bonus was that this has illustrations, which helped bring the story to life even further.

Once we're at the schools, it felt a little bit like Harry Potter (in the best way!) Since our two protagonists are split, we get a close look at both schools with their different philosophies and agendas. Everyone at the schools is as baffled as Sophie and Agatha as they also judge based solely on appearance. Sophie refuses to do villainous work, attempting to gain entrance to the good school while Agatha merely wants to go home. The girls have a lot of (mis)adventures as these goals are pursued. I don't want to share any spoilers so I can't be more detailed but it was crazy entertaining.

Of course there are a lot of other characters. The most notable is Prince Tedros, the most popular good boy who is the object of Sophie's affection. Since she thinks he is the handsomest boy, it is only fitting that she, as the prettiest girl, be paired with him. Sophie and Agatha also have a lot of interactions with all of the other students and a few notable professors.

Now I did have a few little quibbles although they did not keep me from greatly enjoying this book. I think it was maybe a little long? I'm not firm on that but some of the emphasis on who/what equaled good versus bad wearied me; luckily the latter half had more adventure. I also found Tedros to be super dull...but that's only because Sophie and Agatha had so much pizzazz.

Overall: Recommended especially for lovers of fairy tales as well as fantasy fans and lovers of younger YA (I originally thought this was MG but I know think it is sort of on the borderline depending on your tolerance for violence.)

Why isn't a sequel listed on goodreads yet???