You Are My Only 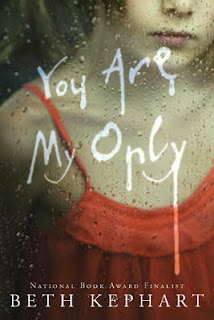 My first Beth Kephart was a mixed bag as I didn't feel much for the characters but I still thought she was a fantastic writer so I eagerly requested her latest when I saw it available on Netgalley. I confess, I thought almost thought this was a ghost or horror story as that is the imagine conjured by the cover for me.

Instead, told in alternating perspectives, this is the story of Emmy, a young mother whose baby is taken one awful day and Sophie, a young girl whose life is wrapped up in secrets as she and her mother constantly flee the No Good.

I'm not sure if the fact that Sophie was Emmy's daughter was supposed to be a surprise or not because it seemed really obvious to me (why else would their stories be connected?) but perhaps it would catch some people off-guard so that's why I marked this post as containing spoilers. Despite the fact that this wasn't suspenseful, I was able to really feel for both narrators, which is good because if I didn't, I would not have liked this book.  The focus is definitely on characters, not plot so it's super important to like them.

Both of the characters are really young: Emmy is just twenty, married and a mother of an infant while Sophie is fourteen and their innocence and naivety really shone through. Each is entangled with less than decent people (the former with a no-good husband, the latter with an often cruel mother) but they also end up having experiences that open up their worlds and lead them back to each other.

Overall: Beautifully written with sympathetic characters if a little light on plot.