Lola and the Boy Next Door 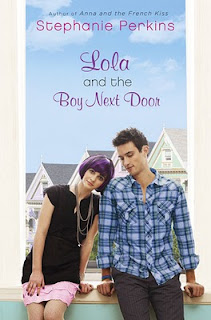 Lola and the Boy Next Door by Stephanie Perkins
Dutton Books, 2011
338 pages
YA; Contemporary
3/5 stars

I mostly liked Anna and the French Kiss with some qualms (mainly that St. Clair is super short, which is reiterated in this book and it may be shallow but I like guys who are taller than me; and the fact that St. Clair CHEATED on his girlfriend to be with Anna-yeah they only kissed at the end but there was serious emotional unfaithfulness going on way before then and I will never stop mentioning that because I've yet to see anyone else mention it and it really bothers me).

But I LOVED Perkins' writing so I jumped at the chance to read this book early despite knowing that the main characters were called Lola and Cricket; Lola is a nickname but Cricket is apparently his real name which makes me think that his parents were on something. Additionally his twin sister is named Calliope, which is rather out-there although less worrying. A Greek muse is clearly a better namesake than a bug. I can appreciate unique names in YA and I hate when character names run together (I read two books where the main characters were Emily and Emma and I kept confusing them in my mind) but they don't need to go that far, IMO.

Anyway Lola is the main character and she loves costumes; quite frankly, it sounded like she dressed like Claudia from the Baby-Sitters Club: absolutely cracked-out crazy.  And while I admired her sewing abilities, she was a ditz who could be out of it for days when the boys in her life confused her.  She is also a character who feels that lying is the best solution for her problems (that seems to be cropping up a lot in the YA books I read). So I wasn't a big fan of Lola.

Then we have her boyfriend Max, a guitarist who is 22 to Lola's just turned 17.  Because of the age difference, her dads require the two to have Sunday brunch, an early curfew, and hourly check-ins when they're on a date. Although Max isn't to my taste (he drinks, which is legal but I'm a teetotaler; smokes pot and possibly also cigarettes, which illegal for the former and super smelly for both!), he seemed like a mostly cool guy. The age difference at that particular point in life is kind of weird but they seemed to have a connection and to be working on building a solid foundation for a future.

However there is the complication of "the boy next door," the aforementioned Cricket, who had a chance with Lola but screwed it up big time. She has decided to hate him forever except that he's really cute, states quite clearly that he does like her and always has, and her dads love him.  Thus we have the typical YA hate of a girl for a practically perfect boy who she clearly adores and who tries to fight her attraction for way too long.

Beyond the romance, there is also Lola's family situation. She lives with her dads, technically her uncle and his partner, as her mom, Norah, became pregnant but was drug-addled and unstable. Norah is still occasionally part of Lola's life, causing embarrassment and hurt feelings whenever she appears.  Lola's dads are pretty great though, if overprotective and a little too interfering with her life. I think it's fine to disapprove of your daughter's boyfriend, especially when he could have already graduated college while she's still in high school; less cool to invite a boy she used to have a crush on but who broke her heart on a surprise "family" outing with absolutely no consideration of Lola's feelings.

Something that most early reviewers seemed to have liked was the reappearance of St. Clair and Anna. As someone who doesn't really like St. Clair, I found their together ALL THE TIME coupleness kind of disgusting (they seem to spend all of their time together or traveling to be together).  I'm usually a much more optimistic romantic but this couple just pisses me off.

By the end of the book, there were some swoony scenes...except that I didn't like Lola or Cricket so I didn't care. Additionally, I didn't feel like the writing was as strong in this book. More scenes felt contrived and the San Francisco background didn't come to life like Paris did. The humor was lacking

Overall-
What I liked: Lola's dads; Max until he was demonized; Norah, who ended up having touching insight.
What I didn't like: Lola--and almost every decision she made; Cricket's name

Cover: I hate people staring at me from the cover and the guy is only okay looking. My imagined Cricket is much hotter although equally tall and lanky.