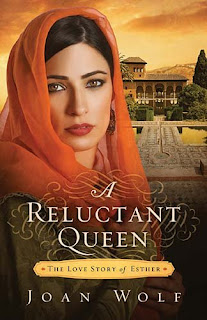 Summary: This is a retelling of the life of Esther, one of two woman to have a book named after her in the Protestant Bible. She marries a non-Jew and ends up saving her people from a massacre, inspiring the celebration of Purim.

I absolutely devoured this book as I found the romantic aspect so well-written and enjoyable especially after reading a couple of books where I thought the romantic aspect was mishandled. Esther is pushed forward by her uncle as a candidate to be the Persian King Ahasuerus' next wife after he disposes of his first. Her uncle foresees her saving the Jewish people in the empire from destruction but Esther fears the loss of her dreams of a life with a good Jewish man.

The book covers about the same period of time as in the Bible but it gives us insight in to the feelings of Esther as she embarks on this radically new life. She is shocked at the different cultural standards and feels unable to handle the expectations of the Jewish elders; she is but a woman. How can she do anything? But even as she no longer is allowed to worship with her people, she is able to draw closer to God and undergo big changes.

One thing I was having trouble with was Haman, who ends up being the one to order the destruction of Jews throughout the empire. How does someone come to that point of wanting to kill so many people? Two things drive him: the refusal of Esther's uncle Mordecai to bow to him (Haman is an Edomite, an enemy of the Jews) and his jealousy over Ahasuerus' attention to Esther. Haman wants all of Ahasuerus' trust and this insane jealousy drives him to make some very bad decisions.

While I didn't notice the changes, other reviewers have mentioned that significant liberties were taken with the story of Esther as presented in the Bible. I can understand their qualms and if I were more familiar with the book of Esther, I would probably agree with them. Happily for me, I have only a cursory acquaintance with that book so I was able to immerse myself in the loving relationship of Esther and Xerxes and allow Wolf to weave her story.

Overall: A fantastic romance and an intriguing spin on the biblical story.