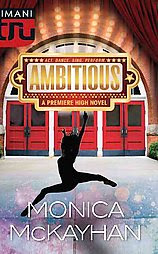 New students Marisol and Drew negotiate the ambitious waters at Premiere School, following their respective artistic passions of dance and acting, making new friends, navigating academics, and flirting with each other. I loved the concept for this as I'm a sucker for "Step Up," "Center Stage," and other dance movies. But I was not very impressed with the book as a whole finding it lacking in plot and characters.

Marisol is a decent character. Her dream is to dance and she pursues that dream by auditioning for the prestigious Premiere School, even though her family and neighbors didn't think she could get in. She does and keeps pushing herself in dance to audition for a dance contest that could launch her into the big time. But she's also caught between new friends and old friends. This all sounds like a lot of drama and conflict but it's not really. Mari easily gets in to the school, despite little formal dance training and easily secures a place in the contest without much training or practice. The friendship drama was a little bit more drawn out but in the end they reconciled pretty easily. Still she was miles better than Drew.

Drew started out okay. He was a star basketball player trying to be like his dad when he decides that he wants to try acting. After a few chapters, he is more fully drawn as an arrogant player who expects everything to be given to him. He's constantly assessing the bodies of the girls around him and using them; he's greedy, cocky, and selfish; and I just disliked him so much. He had little depth, being a pretty rich kid who never really struggles despite the attempts to portray him as struggling. He easily wins the lead in the school play despite being a sophomore with little acting experience. And college scouts are still interested in him for basketball. His biggest trouble is his shyness with Mari, the one tiny area where he has to work a bit but even there he displaces her date, pleasing rather than outraging her.

One other thing I noticed was the presence of various brand names that set the book firmly in this time (Justin Bieber is huge for the girls-I do not get that boy's appeal).  They seemed to dominate the story: from food to clothes to singers. I noticed them so much more than in any other story I've read recently and I didn't really like that.