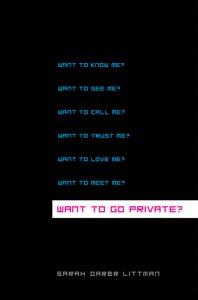 What a haunting book, dealing with such a timely topic. This book deals with teenagers and internet predators as in Abby, a freshman in high school whose fears, worries, and insecurities about high school make her ripe for the attentions of the guy she knows online as "Luke." Halfway through the book she goes away with him, leaving her family and friends to wonder if they could have prevented it and to frantically search for her.

I was back and forth on Abby. On the one hand, her younger sister was presented as a total brat, her father was emotionally unavailable, her mother wasn't very sympathetic, and her best friend was totally pulling away. She was obviously lonely and vulnerable to anyone who could offer a listening ear.  But her fears about high school were so overblown and ridiculous-what makes her think that things can ever stay the same? Why is she so afraid about trying new things when she has her best friend to try some of them with her? Why does she only have one friend and seemingly no other acquaintances? She seemed to want to continue along like a little kid instead of accepting that she has to grow up. Unfortunately she does end up growing up and much too fast when she gets in a car and drives off with "Luke."

I was somewhat shocked by the content in this early part as Abby is virtually seduced by "Luke," sending him provocative pictures, stripping for him, and otherwise bearing her body and soul.  There is some explicit stuff, which was hard for me to reconcile with the fact that Abby is only fourteen.

Then there is Part II which follows the reactions of Abby's sister Lily, best friend Faith, and almost-boyfriend Billy, who all wonder how could Abby do such a thing and fears about if she'll return. It was a switch to hear these new voices but I don't see how else it could have been handled. Happily in Part III, Abby is recovered yet she is shattered and her relationships are in tatters.  But she perseveres and ends up reminding her classmates about the importance of internet safety which is reitereated by Sarah Darer Littman at the end of the book where she includes links about internet safety in the back of the book: http://wanttogoprivate.com and http://chezteen.com. Check them out for tips on protecting yourself and your loved ones from internet predators.