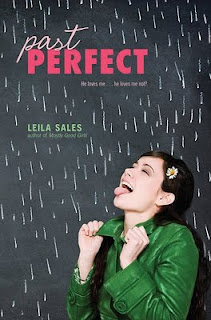 I largely enjoyed Sales' debut novel Mostly Good Girls for its focus on female friendships, so important to me and others during our teen years and yet something that is often overshadowed by the romantic elements in YA novels. And again I thought that was an area of strength in this book as well as the history elements and analysis and the humor.

I mean this book was hilarious! In just the first two chapters, I laughed out loud so many times and the humor continued throughout. Admittedly not everything was hilarious as main character Chelsea makes fun of people who care about historical accuracy-they are not losers. They are heroes fighting a never-ending battle against oversimplification and misunderstandings of our history! Moving on though, the plot is that Chelsea is a re-enactor at a Colonial Times site across the street from a Civil War site. There is an ongoing battle against them waged by the teenagers who work at each site. Additionally Chelsea's ex-boyfriend who she kind of wishes was still her boyfriend is around.

Then there was the friendship with Chelsea boring her friend with incessant reminisces about her ex-boyfriend, hiding things from her, and generally sucking. Happily Fiona is the bigger person and forgives Chelsea for her sucking. They manage to have some good times, whether plotting against their rivals at the Civil War site, test-tasting ice cream, or just laughing together and being silly.

The big weakness for me was one aspect of Chelsea's character and then the budding romance. Chelsea was so into Ezra that she was willing to overlook his flaws (which he most definitely has) and moped almost all the time that they were broken up. She tried to keep getting his attention and this drove me crazy. I just wanted her to get over it. However the new romance didn't really thrill me either. I loved that the guy worked at the Civil War park (btw, Colonial Times > Civil War; yes they had Lincoln but founding America and life, liberty, and the pursuit of happiness come out on top) but I didn't think much of him. So I guess the other parts were stronger for me than the romance.

Overall: A really funny look with some surprisingly deep thoughts on history and memory-on a macro and micro level.