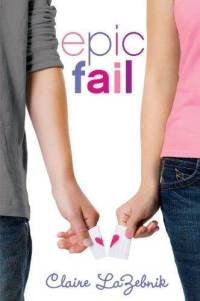 This was completely off my radar until I happened upon a review that mentioned that it was a contemporary retelling of Jane Austen's best known (and my favorite) book, Pride and Prejudice. So I went to my library's website, saw that they didn't have it, requested that they purchase it, and voila now I have read it.

Unfortunately it did not quite live up to my expectations although it was a mostly enjoyable story. There are four sisters, the eldest Juliana, then Elise, our narrator, Layla, and lastly Kaitlyn, who's mostly a nonentity since she's so young. On their first day at a new school, Juliana quickly pairs up with Chase Baldwin while Elise is stuck chatting to Derek Edwards, our Mr. Darcy, whose tough outer shell conceals his fears that people are only interested in using him because his parents are famous actors.

I thought Elise's pride issues were very well-done and the Wickham character was appropriately creepy and remorseless about how his actions hurt people. Elise's family was also suitably embarrassing especially brat Layla and her desperate attempts to appear more mature, often giving the complete opposite impression, and their mother who likes to drink and fawn over celebrity children. The father was also good with his obvious favoritism of Elise and his skepticism about anyone being good enough for her. I also loved Elise's first time at Derek's house-very easy to see how she could fall for that house!

However this story lacked in several ways, when comparing the incidents to the original book. Of course there should be changes but I thought these were particularly egregious. Where was Mr. Collins? A third suitor for Elise could have been fun and Mr. Collins is usually good for some laughs. Also I was not able to identify a Lady de Bourgh character, another shocking omission. Secondly there were not enough obstacles separating Juliana and Chase. And I thought that Elise and Derek got together too quickly, meaning that the last few chapters petered out. There was nothing driving them forward as the main couples were paired up and the ending itself does not read like one. I turned the page and was surprised that it was over.

Overall: An okay reinterpretation but I've read better. Give Prom and Prejudice a try or better yet, read the real thing!