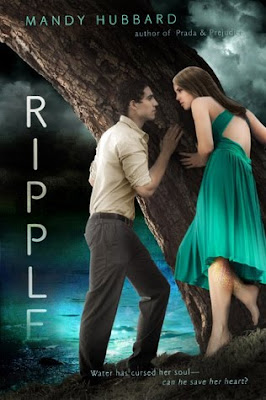 I've had mixed experiences with Hubbard's previous books Prada and Prejudice and You Wish so I was a bit leery of this. However lured by the beautiful cover and Mimi Valentine's endorsement, I decided to take the plunge into this book.  I ended with mixed feelings, some things really pleased me but I thought that others didn't work.

What I loved was the idea of incorporating sirens into contemporary YA. Lexi is a siren whose family has been cursed for generations; on her sixteenth birthday, she called the boy she loved into the ocean and drowned him without being aware of what she was doing. My favorite part though was the romance between Cole and Lexi. She is unable to trust anyone and yet he wants to be the one she lets in. They were so cute together and Cole was super swoonworthy as he tried to get to know her and help her get over her guilt.  I also liked her commitment to protecting her grandmother-I'm big on family relationships.

But he couldn't quite overcome the things I didn't like. Namely the long stretch where nothing paranormal was happening; it was just Lexi complaining about high school cliques and vacillating between sadness at being an outcast and determination that she had to be an outcast in order to protect people from finding out her secret and dying. She was SO annoying and wishy-washy.

The other part I didn't like was the emergence of the villain. It was patently obvious who the villain was because who else would it be? He appeared late and his evil motivation unraveled fast, a little too fast but then I'm glad it wasn't drawn out.  Happily this is a standalone and I don't think that anything else needed to be added; I was satisfied with the ending.

Overall: Not quite as satisfying as I wanted but there were some good things.