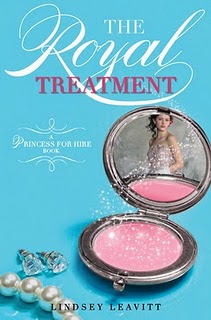 After loving Princess for Hire, of course I had to get my hands on a copy of the sequel as soon as I could.  And yet again, Leavitt leaves me smiling after finishing another delightful book authored by her!  Seriously I love her writing so much-Desi seems so real, the snarkiness level is amusing, and the relationships are super sweet.

At the end of Princess for Hire Desi was promoted to Level 2 meaning that she gets to sub for more high profile princesses.  The result is that she only has two sub jobs in this book but the latter is more extended and way more in depth than anything she's ever done before.

This book also adds on more drama by revealing more about Facade, the agency behind the princess subbing program who may have sinister intentions, and putting pressure on Desi in regards to her real-life.  She may have a crush on Karl, the handsome prince from the first book but she also kind of likes Reed, who just happens to be her best friend's crush.  Then she's juggling the role of Titania in A Midsummer Night's Dream with her extensive preparations to be the best sub she can be.  Exhausting!  I'm not too sure about the mechanics behind Desi's traveling without time changing at home but I don't really care because I enjoy the story too much.

Besides Desi's life, we learn more about Meredith, her agent and guide through the policy.  Meredith is facing her own conflict between her life in Facade and her love for a prince that almost torpedoed her career early on.  I'm so rooting for her to resolve this and be able to balance both but with her rival Lilith constantly lurking, I'm not sure what will happen.

SPOILER SECTION:
Squee-I was totally predicting that Reed was a sub, in particular the sub for Karl that Desi liked, and I was so happy to be proved right. I cannot wait for the third book but I have to because it's not scheduled for release until next year; it doesn't even have a title at this point.
END SPOILER SECTION

Overall: Loved this! Definitely read Princess for Hire first though in order to understand references.
Posted by The Insouciant Sophisticate at 12:01 AM