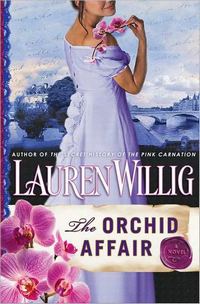 I've been reading the Willig books from the beginning, meaning pre-blog, so of course I wanted to read this one.  It seems so weird to me that the books started in 2004 and because the modern section moves so slowly it is still 2004.  I'm not sure how much has changed since that time but I know a lot has.  What hasn't changed is Willig's ability to craft a satisfying historical espionage with delightful writing and characters.  In fact, I would say she has improved as this was one of my favorite outings so far.

This time we have Laura Grey or Griscogne as she will be known when she becomes governess to an important official in Napoleon's government in 1804.  Over her sixteen years of governess service, she has become as bland and plain as her name suggests, able to hide in plain sight.  But this is her opportunity for something different, to serve with the forces arrayed against Napoleon in a spy mission in collaboration with the Pink Carnation and forces.

Her employer is Andre Jaouen, who has his own secrets and two children in need of education and attention.  Although outwardly secure with a powerful patron, Andre is in a precarious position with the sinister Gaston Delaroche dogging his steps.  Soon he and Laura will have to use all of their wits to escape certain torture and death and protect the ones they love.  Their romance was one of my favorites within this series and I felt it was really built on solid foundation that bodes well for their future.  The spy part wasn't quite as thrilling because I had no doubts that they would extricate themselves from their troubles.  Don't get me wrong, it was fun to read but not as suspenseful as some others.

Meanwhile back in 2004, Colin and Eloise are going strong but Colin faces challenges from his family and his douchey cousin/stepfather Jeremy.  They are also in Paris and I wish there could have been a bit more of them because I really want to see how they deal with the new challenge but I guess I will have to wait for the next book.

Cover: I really like this cover although perhaps the dress should have been more grey?
Posted by The Insouciant Sophisticate at 12:01 PM