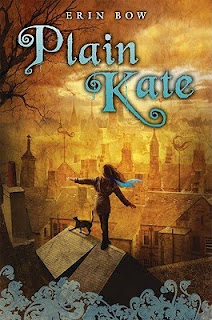 Plain Kate is orphaned early on in the book and left to fend for herself as an extraordinarily talented wood carver.  She mostly manages to scrape by but when a witch named Linay comes to town her forces her to give him her shadow in exchange for her heart's wish.  Soon after the exchange, she realizes that she needs her shadow back and she sets off to find it.

Admittedly this book caught me at a bad time, I'm really struggling with my future, but it did nothing to lift my spirits.  Instead I was overwhelmed with the casual cruelty, greed, and superstitions of most of the characters within this book.  Even those who were initially sympathetic to Kate's plight easily turned on her, believing the worst and allowing her no chance to defend herself.  Additionally late in the book Kate had to kill her cat, the one bright spot of the book as he acted in such cat ways and made me want to hug my cat.  Yes, he is brought back to life but the pain over his initial death was very hard on me.  Happily his resurrection brought my rating of this book up to a 3.

Besides the depressing themes, I didn't really connect with the writing style.  I felt distanced from most of the characters, except for the cat who was the definite highlight. The world was mystifying in many ways to me: why do people loathe knife-carving so much?  Why is there so much eagerness to have witch burnings?  It seemed so foreign and the words did not create a bridge to help my understand.  I wanted to love the fantasy world but instead I hated it.

Overall: A dark story with little of the cheer I seek in a book.
Posted by The Insouciant Sophisticate at 12:01 PM