War and Peace: the Conclusion 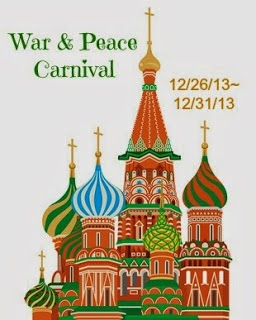 I am so thrilled to be linking up to this carnival, celebrating the fact that I read this monster book! Unfortunately I don't feel like I have much to say. I was pleased to peek in at these characters some years after Napoleon has been defeated and to not struggle through any of the dull war scenes. Good things seem to have happened to our two main couples and since I liked them, I was able to enjoy that. However I still don't have that emotional connection to anyone that I feel when I read my favorite books. The onslaught of people and plot was just too much. I think back to the very first posts I read for War and Peace and the mention of just letting every bit wash over me instead of stressing over getting all the character names and relationships. I think that is a very helpful conception and I would encourage any other potential readers to consider the book in that light. Saying that, I did mostly get the character names and everything by the end just because they were repeated enough.

And then there's the second epilogue, which had its interesting moments especially to me who studied history in college but was overall way too much from Tolstoy about his opinions regarding history and the way it is studied and written about during his era. He argues against the idea that great men made things happen, which is not really part of mainstream historical study anymore so his rant against it felt very old-fashioned to me.

Would I recommend this? I am mixed on that. On the one hand, I feel so satisfied to have completed this and really proud of myself for sticking with it for this whole year. On the other hand, I didn't think it was that great. I can think of so many more classics I've read and liked more, possibly because they more closely hew to the format of a traditional novel (one of the reasons I want to give Anna Karenina another try and hopefully finish in 2014.)