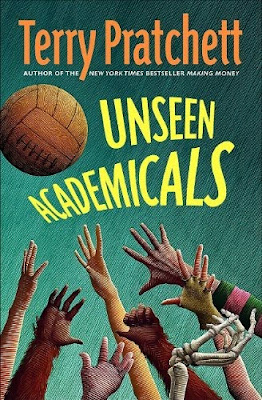 Back in November, I signed up for a Terry Pratchett challenge. I forget that it started in December and so planned to wait until January and then I was reading other things so it is just now that I read my first book for the challenge. I knew that my school library would have it so as soon as I had a chance I went there and checked it out.

Overall, I really enjoyed it (although I prefer football to the soccer described here!) I will try to summarize it although that may be a little hard. Basically the wizards at the university have to play football in order to continue to receive a bequest. Unfortunately football is currently a dirty unregulated sport but the Tyrant of the city has plans to clean it up through the wizards. Trev Likely, a worker at the U and the son of a football legend, falls in love with Juliet, a gorgeous girl who roots for his team's rival. Glenda tries to look out for Juliet and becomes interested in Trev's mysterious coworker Nutt.

I was excited about the idea of a Romeo/Juliet love story which this isn't so much and I ended up really loving Nutt. He doesn't know exactly what he is (not human, dwarf nor troll) but he's exceeding erudite and polite. The wizards are mad fun and Death even pops by very briefly (wish there had been more of him but then again I didn't want any of the characters to die)

Overall: I would say 4 and say that it reminds me that I need to do a lot more reading of Discworld instead of being distracted by other books.
Posted by The Insouciant Sophisticate at 12:01 AM