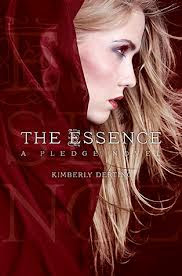 When I read the first book in the series, The Pledge, I found it to be a fast moving plot-driven story that kept me breathless turning pages. So even though the characters weren't very substantial to me, I still wanted to check out this second book. I'm definitely bummed it has taken so long to arrive but I'm glad I checked it out.

After overthrowing Queen Sabara, Charlaina has assumed her rightful place as Queen of Ludania and has been implementing big changes, trying to unite everyone as one people, in one class, under one language. But not all are pleased about this change. Adding to Charlie's troubles are the fact that Sabara's essence is still contained within her and is pulling her in many different directions as well as a traitor, betraying all that Charlie has worked for.

I thought the plot was a little less engaging this time as frequently is the case. Fighting for freedom and liberty is usually more fun to read about than building a stable kingdom based on those principles. The weirdest part to me is how Charlie's closest friends are now her advisers despite only being around sixteen (or that was my impression of their age). Are there no adults who fought and would be appropriate? Also as I mentioned, there is a traitor who I kind of picked out (yay me!)

The most interesting part to me was seeing Charlie trying to interact with other queens to prepare her kingdom to resume its place with allies trading. She's a lady who prefers trousers but is forced into a dress to learn etiquette. Second most intriguing was Charlie's battle against the essence of Sabara. Her voice is represented in italics and she is absolutely devious, still intent on gaining a body, whether Charlie's or maybe someone else's. We also learn more about her back story and just about how long she's been around. These elements helped push me through some of the duller parts.

Overall: A sequel worth checking out if you liked the first.