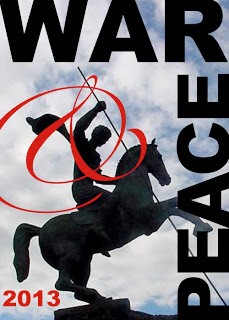 Hosted by My Friend Amy and Iris On Books

Reading Update: So I originally said I would read a chapter a day for 21 days, thus leaving me sufficient time to digest and plan a nice write-up for today. What actually happened? I read two chapters in the beginning of February and then everything else last night, cramming names into my already fried brain. I found this section very overwhelming but it partly was my fault for putting it off for so long. I will try to be better for the March section.

Saying that, I'm not sure this section would have worked that much for me anyway as it was very heavy on the "war" part, focusing exclusively on the Russian army's travails against Napoleon's army in 1805. I have vague memories of studying this in school but that was only the big details. Tolstoy is definitely putting in a lot of other details. The main character I noticed was Prince Andrei, also known as Bolkonsky (why yes I was confused the first few times it switched between those names for him). There is also Prince Nikolai Rostov, Denisov, and Tushin, although I'm pretty confused as to their position in the army (there are generals and adjutants it seems mostly?) I feel very overwhelmed but am trying to just sit back and enjoy the story, knowing that I will not be able to absorb everything on first read.

Looking forward to the next section (Volume I, Part Three), which shifts back to Russia and features some of the female characters. As I tend to prefer stories about women, I am hoping this section will appeal more to me. I will also try to keep notes as I read, especially if anything stands out to me.

Are you participating in the readalong? How is it going for you? What are your thoughts on this section?