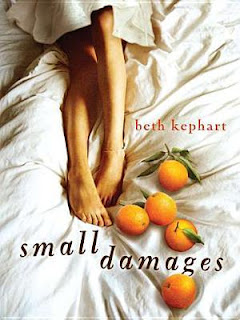 After having some mixed experiences with Kephart's previous works, I had decided to swear her off, sensing that we just did not click. But then in the year end wrap-ups, I saw some of my favorite bloggers praising her latest (see below for links) so I gave in and picked this up at the library. As you can see from my rating, I ought to have abstained.

After her father's death, Kenzie discovers she is pregnant by her Yale-bound boyfriend (realized that my opening may have made this sound like an incest book, which it's not) and she insists on giving birth to the baby. So her mother arranges for an adoption and for Kenzie to reluctantly spend the summer in Spain where the adoptive parents reside. There she meets people and discovers things.

While I can see the beauty in Kephart's writing, I just found the entire experience of reading this so dull and unengaging. I felt dropped into the story without necessary contexts; I spent most of the story thinking it was set in 2012 (it's not; it's 1995-why 1995? I don't know); I think there might have been a new romance blossoming for Kenzie with a boy in Spain but I'm not sure; I'm not entirely sure when and how she got pregnant beyond knowing in my head the mechanics of human reproduction. Was it a reaction to the death of her beloved father? I didn't get a good feeling for their connection (and that's bringing all the feelings about my dad into this story-I know I would have been devastated so why can't I imagine Kenzie as devastated? She didn't feel real to me.) There were some very emotional moments for the characters in the book but I just felt nothing beyond boredom and wondering if I could still count this as a book read if I skimmed to the end (I decided that it does.)

Suffice it to say that I can recognize the skill in the writing here but it all left me cold. I wanted to feel something, I should have felt something considering the themes touched on and yet nothing.

Other Opinions-all positive so you can get another perspective on this book's merits:
Forever Young Adult
Jen Ryland/YA Romantics
My Friend Amy