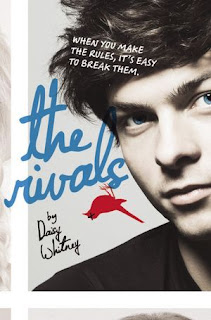 The Rivals by Daisy Whitney
4/5 stars
Little, Brown and Company, 2012
344 pages
YA Contemporary

The Mockingbirds was one of my favorite reads so I was interested in reading the next installment. One of the issues I had (actually my only issue) was that the students undertook their own vigilante justice because they don't think the administration will do anything. I was horrified that the faculty and staff were not notified and neither were the police nor her parents when Alex was date raped (seriously, she never talks about/to her parents...I can't imagine not talking to my mom every day...is the boarding school setting really sufficient to erase the parental units?) Excitingly this book does tackle that issue.

It is now Alex's senior year and she has become the leader of The Mockingbirds but her first case is going to test the group. Unlike previous crimes which had a clear perpetrator and victim, a cheating scandal is brewing. Who is plotting this? Who would be considered the victims? And how are they going to gather evidence to shut this down?

Alex does reach out to the administration early on and receives the very clear message that they want their students to be successful. But no action is taken. Although I find it difficult to believe that these adults would be so blase, at least they were represented.  As for the vigilante aspect, Alex's attempts to explore the cheating ring draw her in deep and have her questioning that very thing. There are no easy answers, no black and white answers in the real world.

To add to all of that drama, Alex is trying to get in to Julliard and is having struggles with her boyfriend as a love triangle seems to pop up. As I ended up liking the other guy more (he has beautiful hands), this wasn't my favorite aspect. It also seemed to be a bit much on top of all the drama around the cheating. Additionally the love triangle just falters at the end; if it's going to play a role, I wanted it to play a bigger one (I might never be satisfied on this issue-if there had been more, I probably would have complained that it was dragged out for too long.)

Overall: A challenging sequel that delves deeper into the moral implications of vigilantism and justice, among others while deepening the characterizations of main character Alex and her friends.

Cover: My mom thinks the boy looks like Harry; I thought Louis but either way we both think he looks like a boy from One Direction, which is quite frankly a weird direction (haha) to take this cover. Females are the most important characters so why isn't a girl on the cover?