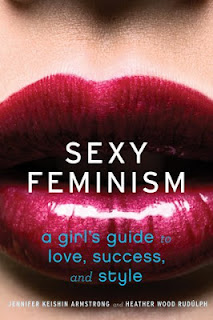 I've considered myself a feminist for probably about ten years now, since I was a teenager and started learning what feminism could mean. That commitment has never wavered through years of attacks on feminism, women, etc. But I haven't read many of the classic feminist texts (bell hooks being someone I keep meaning to try but I keep getting sidetracked by all the fantastic YA fiction out there!) so I do keep an eye out for new texts that could become feminist classics.

Unfortunately I don't anticipate this being one of those works. It's written very simply and engaging but is ultimately very simplistic. My main reaction to everything was "...and? Your point is?"  There really wasn't much depth and I was expecting more. I wonder if this might be a better starter feminist text because nothing in here was new or challenging to me. I feel like I was encouraged to create my own life that works for me, which, um, I was already doing.

There were some great ideas in here but I didn't think they received enough attention. For example, political rights are largely skipped over but there is an entire chapter on bikini waxing (dull as dishwater to me). Sexy feminists are given a brief profile but not very many-I would have loved some more analysis of contemporary women who are making their mark on feminism through their actions in the public eye. In some ways, the book seems to be more about making the word "feminist" more palatable to people by making it not sound so crazy (what is crazy about valuing the life and contributions of approximately 50% of the world's population as much as that of the other 50% I ask?) and I am in favor of that but I wish this book had more of substance to offer.