A Conspiracy of Alchemists 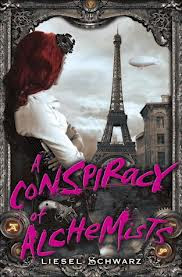 When I read the summary for this book, something about it made me think of Gail Carriger's Soulless books, the first one of which I enjoyed (haven't had a chance to try the others). But when I picked this one up to read, it just wasn't clicking for me. I had to make myself concentrate and give it a fair shake in order to be able to see its merits.

I will get to why I didn't love this in a second but first I really want to applaud the steampunk elements. I thought every bit was pretty fantastic. This was no halfhearted attempt to cash in on the steampunk frenzy; this was a carefully planned and written incorporation of some of the most interesting parts and it pays off. As I've been discovering, I really love the idea of steampunk and it's great to read it being done well.

On the less positive side, I just had trouble clicking with Ellie Chance, our main character here. She is very special and talented, which is only just starting to be unraveled in this first book. But she's also incredibly stubborn, including shutting out people who have information, no matter how vitally important it might be. There are several places when she ducks out of learning something that might have helped her to know. The other main character is Mr. Marsh and I really liked him. He's a Warlock and although his character is somewhat mysterious, I enjoyed the time we got to spending learning about him.

There are a few other characters but the story mainly rests on the two already mentioned, which surprised me. I expected a much larger cast to populate this bustling world and it made me try all the harder but ultimately unsuccessfully to fall for Ellie. Future books have a lot of room to play with and I hope that those who liked this first book will continue but I will not be.

Cover: Not that much of the book takes place in Paris although that is the opening scene. Actually a lot of the story takes place while traveling so a train or dirigible might have been more fitting.