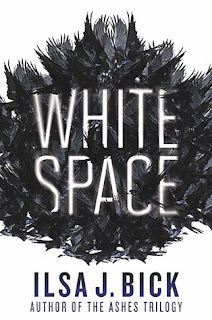 I have read several Bick novels and appreciated how they were challenging unique titles that tackled topics not frequently seen in YA and didn't follow a cookie cutter mold. So while I knew to expect something out of the norm when picking up this latest release, I didn't really have any way to prepare myself for what was to come.

The book was very confusing in the beginning, purposefully so as we are introduced to a wide assortment of characters and their connections are not immediately obvious. As the book progresses, their narratives start to overlap and some things begin to make sense. Luckily the characters themselves explain a lot instead of just leaving it up the reader. If I had to piece together everything on my own, I would have understood far less. As it stands though, I spent much of the book confused and, because this is first in a series, I am still left puzzled by some aspects albeit with zero interest in continuing the series to find out more.

At this time in my life, it was a struggle to read this massive book with all of its meandering passages and seemingly unconnected plotlines. It did move faster as I got further in to the book but my attention span was not well suited for this story. Another hindrance for me was the extended horrific imagery. Some terrifying things happen in this book and Bick does not stint on the details. There is oozing and creatures of the dark and of the mind. I'm pretty sure I'll be able to sleep tonight but if not, I know what will be causing my nightmares!

Still I can point out some of its virtues. Generically it is very meta, looking at the nature of stories, writing, and characters. I can't provide any concrete examples for this because they might end up being spoilers so you will just have to trust me. Specifically it seemed to reference other works of literature, primarily HP Lovecraft, Charles Dickens, and Sylvia Plath. I am only familiar with Dickens so I'm not sure I got the full benefit of these allusions. In general the writing was more literary than my usual taste but that will be a good thing for some readers. And as I referenced above, it is quite unlike the YA I usually read and see around the blogosphere. These positives were not quite able to outweigh my early confusion and its horror genre but I can see there being a passionate audience for it.

Recommended: for the ambitious reader, well-versed in literature; the lover of horror stories; the patient reader who is in it for the long haul.