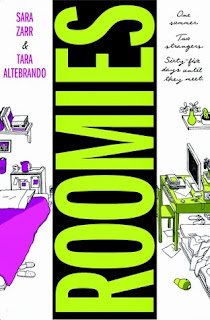 When I saw that this book was told in alternating perspectives and incorporating the use of emails, I was immediately sold. That put me in mind of beloved childhood read PS Longer Letter Later by Ann M. Martin and Paula Danziger. Though I was disappointed to discover it wasn't told exclusively through emails, I still loved the idea of future college roommates connecting the summer before freshman year and being impacted by that relationship. I did have a roommate my first year in college and we roomed again sophomore year but we were never that close. Our interests sharply diverged and we tended to be more ships passing in the night instead of close friends, which is fine. She maintained a standard of cleanliness I could live up to and she didn't bring weird people back to our room. Sometimes I wish we could have been best friends but it is what it is.

Which rambling brings me to the girls in our story, who seem wildly different at first but who learn important lessons about relationships through their email correspondence in the waning hours of their pre-college life. In New Jersey, we have Elizabeth who is bubbly and looking forward to big changes in Berkeley. Her roommate to be is Lauren, the eldest of six children in San Francisco seeking peace and quiet. Both experience ups and downs with boys, friends, and family over this crazy summer.

As I've shared before in my reviews, I'm a reader who loves epistolary novels so that was a huge draw for me. I got excited every time one popped up and felt they were used pretty well. They didn't overwhelm the reader but they effectively moved the plot along and reflected each girl's personality. I am guessing each author wrote exclusively for one character and felt that this contributed to keeping them distinct. A complaint I've seen of some dual narrators written by one author is that they feel too much the same and that is definitely not the case here.

I think I did end up preferring Lauren with her seriousness and commitment of family but Elizabeth was also a good character to read about. I know I sometimes will vastly prefer one narrator to the other but it was almost equally balanced here. There are also some great secondary characters; for me, that would mostly be the love interests but Lauren's parents have some touching moments too.

Overall: A funny sweet story that touches on something I haven't read much of before (college roommates to be, who knew?) while also touching on universal relatable themes in an extremely readable writing style.